A techno band started in 1999, with a 2011 release. Not in the realm of gothic or EBM. The zombie theme is not present in most of the music. The sound is in the area of early 90s techno like Praga Khan, but with less vocals. 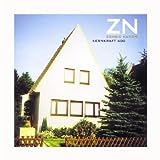