Released April 2011 – A moody CD which sounds like the indie music you would hear at the end of traumatic resolution. There are dark overtones throughout the whole CD, with a sad synthpop edge. Brings to mind something that would have been released on Touch-and-Go records in the early 90s. Smart melancholy music for the end of the world. Enjoy.

Tweet
Black Orchid: From Airlines To Lifelines
IN STOCK 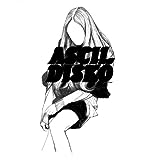 Surprisingly emotional and introspective, Black Orchid: From Airline to Lifelines is the fourth full-length album released under the Ascii.Disko name, and the second on Canadian label Artoffact Records. Mastermind Daniel Gerhard Holc is one of the most innovative producers of electro-clash, techno, and synthpop music in the European scene today, and recognized for his artistic achievements worldwide. Over the last few years, his music has been showcased in art galleries in Japan and Mexico, as well as in Oslo, Bogota, Seoul, Madrid, and Milan just to name a few. The new album explores new territory; think Matthew Dear meets Joy Division. With such a diverse output (who else DJs to late-night rave crowds and produces minimal drone for gallery openings?), Ascii.Disko is one of the artists to watch in 2011.