Mona Mur En Esch – Do With Me What You Want

September 2011 – New release from Mona Mur En Esch titled Do With me What You Want features a total of 13 tracks. Their sound theme is both slow and seductive industrial with a hint of Lords of Acid scented lubrication. The band is composed of Mona Mur and ex-KMFDM guitarist En Esch. The thirteen tracks, when played consecutively, sounds like the perfect CD to play as a sensual interlude during a harsh night of hardcore industrial intensity. Not to say this CD is low impact by any means, it just has an ambient flavor throughout several of the tracks.

Think of it as smart industrial music.

The opening track, Touch, sets off the wild ride into what is over an hour of pure pleasure.

The best track on Do With me What You Want is Eiskalt (In Der Liebe Und Im Krieg), a song sung in German, which sounds like a song to play during your next S&M session.

Tweet
Do With Me What You Want
IN STOCK 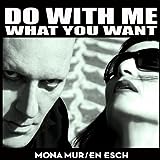